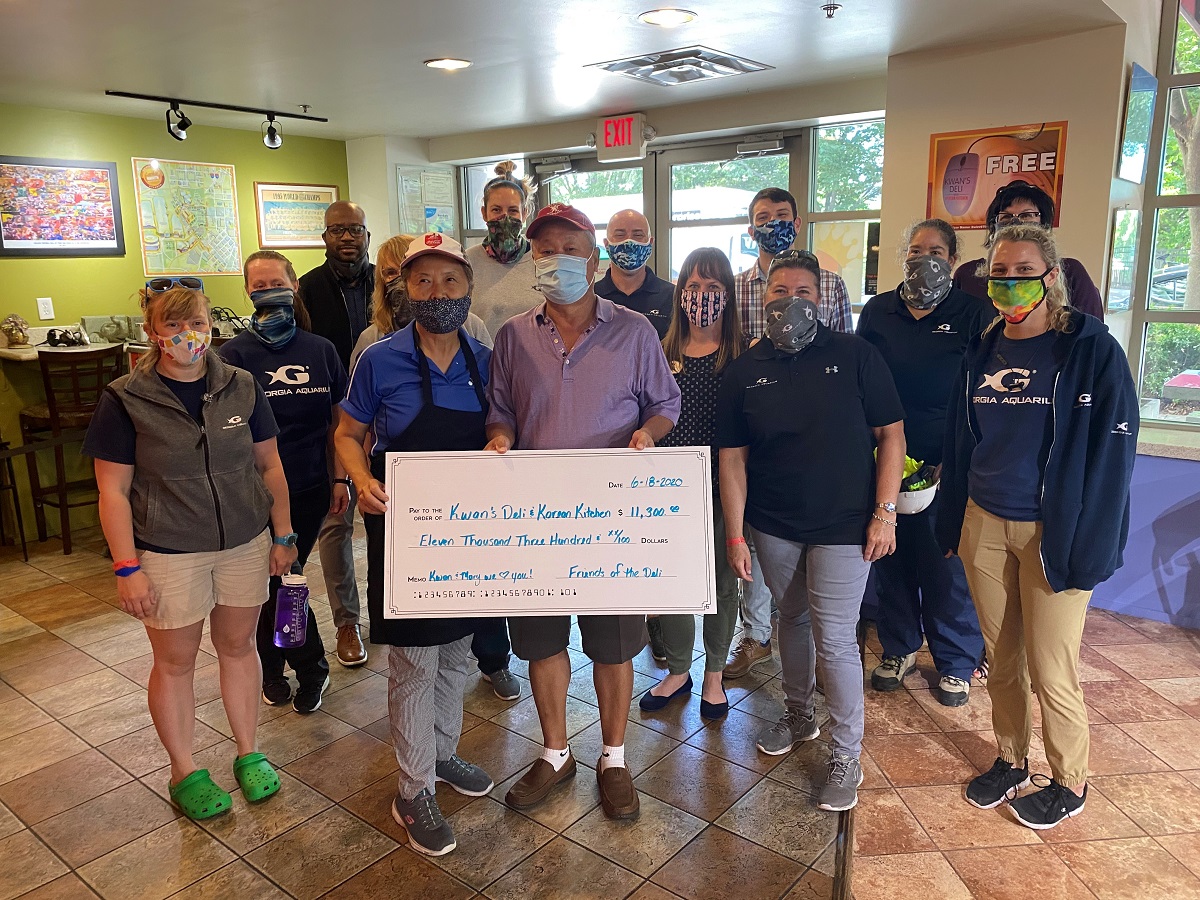 Neighbors in Downtown Atlanta’s Centennial Park District have stepped up to support one another during the series of challenges faced in 2020.

Tucked along Park Avenue W NW, across the street from Centennial Olympic Park, family-owned Kwan’s Deli and Korean Kitchen has been in operation since 2003. Open to serve residents, visitors, and Downtown workers, Kwan’s is also a special favorite of employees at nearby Georgia Aquarium.

In addition to the economic hardships brought on by the COVID-19 pandemic, Kwan’s was among storefronts in the neighborhood that sustained significant damage during community protests in late May and early June.

Kimberly Stone, Curator of Fish and Invertebrates at Georgia Aquarium, was moved to create a GoFundMe page for Kwan’s as a gesture of support for a beloved neighbor. The effort raised over $11,000 for the business.

See the Story on WSB-TV

“I think the overwhelming feeling that our family had in in response to the GoFundMe was just thankfulness and a deep, deep appreciation for everyone customer who dines with us. I don't believe that any of my family members would have thought that our small family restaurant would become a part of life for so many employees in the area. For them to see their local spot go through an unfortunate experience and respond the way they did, just makes us incredibly thankful. We hope to always provide good food and great service, and now we are looking forward to getting back to some semblance of normal where we can show our appreciation for their care and thoughtfulness.”

“I moved to Atlanta back in 2004 to help with the opening of the Georgia Aquarium. The entire 16 years I have worked in downtown Atlanta, I have seen this area grow and prosper through the years. When I started, there were very few establishments around that we could go to for a quick lunch except for Kwan’s Deli. I can remember back during construction of the Aquarium when there were very late nights we could always count on Kwan’s to be open for a good hot meal. Since then we routinely (pretty much weekly) visit the Deli and both Kwan and Mary have become part of our family. When the area had to shut down earlier this year due to COVID-19 we knew this would take a toll on all the businesses in the area. Then on the night of May 29th I was at home watching the peaceful protests in downtown Atlanta on TV and when things stated to turn negative I watched as businesses in my own backyard started to get destroyed. I immediately thought of Kwan and his family owned Deli and prayed that they were all safe. The next morning I walked down to Kwan’s to see if there was anything we could do to help as we saw other volunteers from all over sweeping the sidewalks and helping board up windows. When I found Kwan outside I could see the stress, sadness, and defeat on his face. It was very emotional. I reminded him that we are all one family and to let us know if there is anything he needs to help pick up the pieces. It was then that I decided to try to help him out financially. I knew that other establishments probably had corporate support but Kwan would not. I was in total shock when I saw in the first few hours of setting up the Go Fund Me page we had surpassed the original goal. As the days went on more and more people wanted to show their love and support to the Deli who has supported us all these years. When I touched base with Kwan about the fundraiser he was overwhelmed by the support and said that it helped him and Mary to mentally keep going with all the setbacks they have had. Also what struck me most was that he promised me that everyone in his family would “pay it forward” at some point in the future. That is what it is all about.”